AngelHack organized the AppHack Hackathon in Seattle this weekend on Nov 2 and 3. It was a great event and I partnered with some really talented folks to build SourceReporter - a way to democratize news reporting. We were placed second and got a chance to take home, the trophy made with all the soda cans and cereals we could not eat over the weekend :) 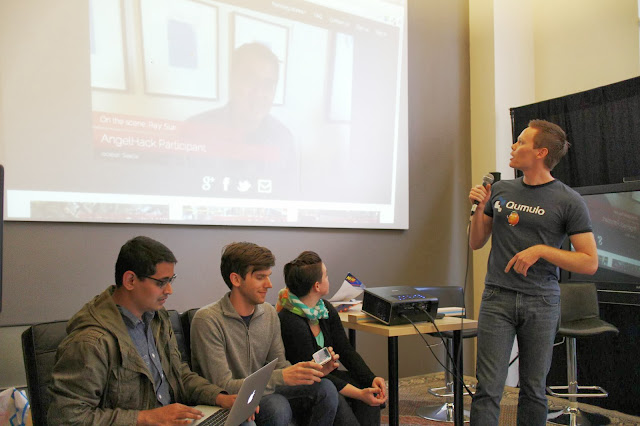 Twitter is increasingly becoming a great source of news. With cellphones now omnipresent, events and incidents are also recorded and show up on youtube way before they are broadcast on news channels. However, these videos are more like raw footage and news channels usually have to edit them to bring them at par to the videos that they relay.

SourceReporter is a web application that can be loaded on the mobile browsers can people can start broadcasting immediately in real time. The "reporters" can enhance the recording using tips that are displayed when the video is being recorded. These tips could range from simple cues or sample interview questions to help the tongue tied to ideas on orientation or duration of each recorded segment. CNN also seems to have iReport and this project brings those ideas together with technology.
The casual viewer is on a desktop and sees about some incident on Twitter. Alternatively, the viewer is passing by an incident and is curious to see what is going on. He hits the site to see a list of all active reporters in the area and can zoom into one of the reports. The interactive maps has pins that show reports from an area, graded by how fresh the report is. The site cycles over the live reports and viewers can rate and review individual reporters.
Monetization could be by showing advertisements between report segments, tips to reporters or licensing content to new agencies. The reporters will also receive a major part of the tips and licensing fees.

Over the weekend, the entire project was built in Node and used HTML5 features. The real time communication was made possible using webRTC and Socket.IO server. This was the first time we had a designer and the final product did look very professional. The maps was using Bing Maps and the CSS was based on bootstrap. The code, as typical of a hackathon, was copied and hacked together - a big mess but hey, all the moving pieces work ! We also integrated the ark.com API to fetch information about a person talking in the interview so that the reporter does not have to type in all the information on the mobile phone.
The source code is available at https://github.com/hverespej/MobileNewsNowReporter and also has steps to run it in the README file.

A lot of folks we spoke to did tell us that the idea was interesting and maybe of value to them. Apart from the obvious item to fix the code and polish the idea, we could look at working with news agencies to help them get the content they want from the citizen reporters.
Posted by axemclion at Monday, November 04, 2013