I have been working on browser-perf for quite some time now. With browser-perf and perfjankie, front end performance monitoring can be easily added to any continuous integration system. These tools make a lot of interesting metrics available. I always wanted to a project that demonstrates how this information can be actionable and associated to code that can be fixed to improve performance.

Perfslides is a project to show how changes in code across individual commits can impact smoothness and jank of a web page. It also doubles up as a slide deck that was used at conferences where I spoke about these tools.
The project has a simple, long and scrollable webpage on which the performance tests are run. The perf branch has five commits which are compared. Each commit is isolated in functionality to demonstrate a problem with jank or how it was fixed. These code snippets are from real world projects.
A graph over these five commits clearly shows the relation between the changed code and their impact of performance.

The Commits
The five commits are as follows
Integrating performance tests was as simple as adding a grunt task from perfjankie. Running grunt perf starts up the web server, connects to local selenium, runs the tests and saves all the data to a local database. This data is also replicated to a cloudant server and shows the impact of each commit on the metric.

The Metrics
Some noticeable and interesting changes to the metrics are 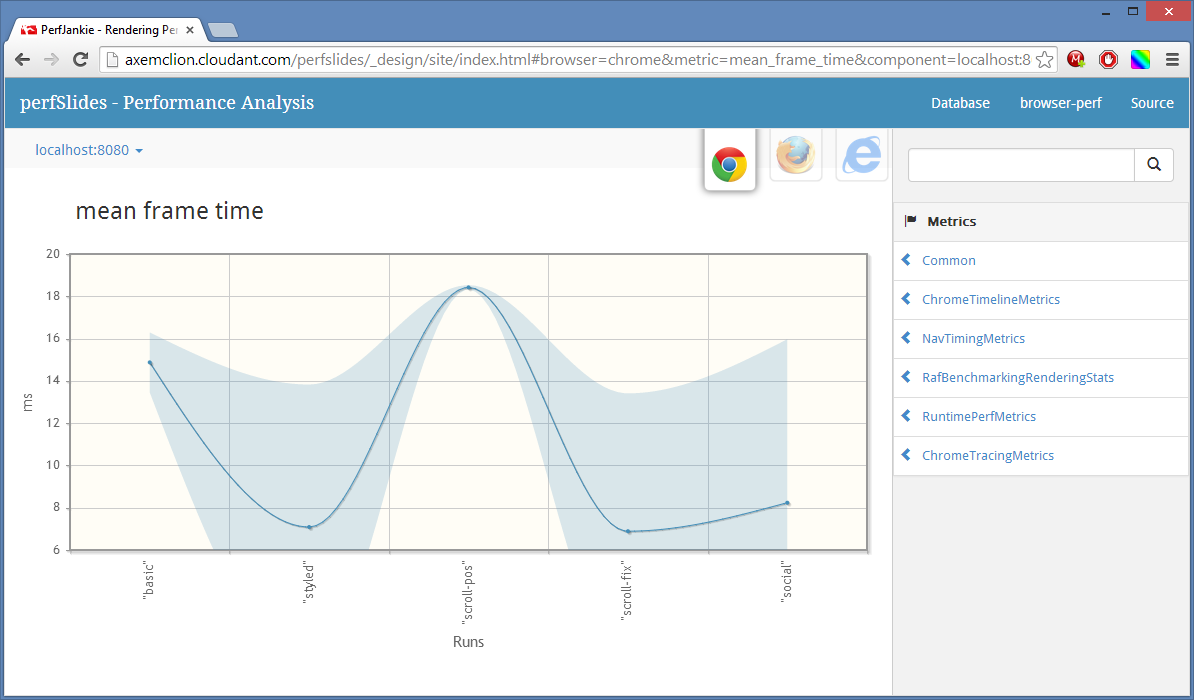 Testing Cordova
The built folder was also copied to the www folder in a cordova project and similar performance tests were run. The results were very similar.

Using it for your sites
Checking the developer tools for performance regressions after every deploy is very hard. Using tools like browserperf and perfjankie make tracking regressions simple. You could simple add a grunt task as shown in this project, connect to hosted browsers on saucelabs and save the data on cloudant. Alternatively, you could also try out this entire setup by signing up for perfmonkey.com, and sending a CURL request every time a new version of the site is deployed. Perfmonkey.com is a hosted service that does all this for you.

Follow the projects on github or watch out this space for more updates.
Posted by axemclion at Tuesday, June 03, 2014